Professor, Graduate School of Education, the University of Tokyo

Launched in 2016, EDU-Port Japan is an initiative to disseminate Japanese model of education overseas. During Stage 1 which covered the first five years of the project, EDU-Port Japan implemented 66 pilot projects in 36 countries and regions with the aim of developing models for overseas expansion. I am greatly impressed with the creative and imaginative projects that have been implemented by spectacularly leveraging the accumulated knowledge and experience of various stakeholders in Japan in the field of education. As a member of EDU-Port Japan’s Steering Committee and Board, I have watched the initiative grow and develop thus far and I would like to take this opportunity to express my heartfelt esteem for everyone involved.

EDU-Port Japan is based on a new idea never previously challenged by the Ministry of Education, Culture, Sports, Science and Technology. Hence, it has been pursued through repeated trial and error while experimenting with different content and different methods of introduction. When EDU-Port Japan was first launched, it was extremely challenging, but thanks to the efforts of everyone involved, it has been enormously successful. Such is the impression I have received from the comments I have heard from people involved in the pilot projects in various countries, who have expressed their appreciation of EDU-Port Japan and their high expectations for the project.

Nonetheless, the initiative has by no means reached completion. If anything, it might be better to say that the foundations have been laid and dissemination can finally start in earnest. Based on the results of repeated trials in Stage 1 (EDU-Port Japan 1.0), the question in Stage 2 (EDU-Port Japan 2.0) which began in 2021 is how to boost the roll-out. In the symposium Toward EDU-Port Japan 2.0 (https://www.eduport.mext.go.jp/event/symposium/symposium-2020/) which was held on March 9, 2021 to review Stage 1, a panel discussion took place with the participation of people involved in the project as well as various experts, resulting in the Proposal for EDU-Port Japan 2.0.

The proposal emphasizes the importance, when moving ahead with EDU-Port Japan 2.0, of aiming to “expand horizontally and deepen the platforms built to date” while reaffirming that EDU-Port Japan is “port-port”.

The concept of “port-port” is based on the image of ports around the world where people, goods and information gather and information is shared and disseminated after new value has been added. In other words, “port-port” means that Japanese model of education leaves ports in Japan and arrives at ports all over the world where it is accepted by many people and finds new value before returning to ports in Japan. In fact, when Stage 1 was first rolled out, EDU-Port Japan was criticized by some as aimed at “exporting” education and imposing Japanese thinking and structures on developing countries. The “Port” in “EDU-Port”, however, means a port or harbor and the key prerequisite is that the concerned parties in Japan and overseas work together on an equal footing.

When building this “port-port” relationship, it is important to aim for the following three objectives.

In order to achieve the above three objectives, it is vital to “expand horizontally and deepen the platforms built to date.” With a few exceptions, the pilot projects in EDU-Port Japan 1.0 were implemented bilaterally and with certain restrictions on participants. Interaction among the participants was provided through subcommittees and seminars, but it was not enough to bring about the creation of new ideas. EDU-Port Japan 2.0, therefore, must actively tackle the following topics.

Led by international organizations (OECD and UNESCO), in recent years the importance of developing the qualities and skills of each and every person in order to achieve individual and social well-being as the future shape of education has been the subject of lively debate. Similar debates have taken place in the Education Rebuilding Council in Japan. Such discussions have highlighted the importance of examining ways to exploit the merits of Japanese model of education with its aim of cultivating well-balanced academic ability, rich humanity and a healthy body. As EDU-Port Japan 2.0 forges ahead based on this proposal, I look forward to seeing education conducive to individual and social well-being put into practice both in overseas classrooms where the initiative is implemented and in classrooms in Japan. 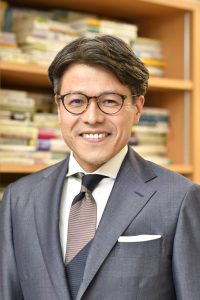 Professor, Graduate School of Education, the University of Tokyo

Graduated from University of California Los Angeles Graduate Program in Education. Ph.D. (Education). Research areas include comparative education, international education development. Started his current position after working at UNESCO, Nagoya University, and Sophia University. He also serves as member of the Tokyo Metropolitan Board of Education. His main research topics are: 1) Education policies and practices in Cambodia and other developing nations, 2) Internationalization of higher education and “Knowledge Diplomacy” in Asia, 3) Development of citizenship through Education for Sustainable Development (ESD).
Recent Publications: 『SDGs時代の教育』(Editor, Gakubunsha)